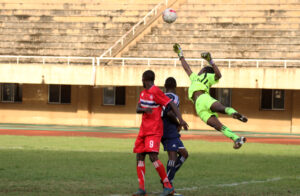 Joel Madondo scored a brace for hosts Kirinya-Jinja as they came from behind to draw 2-2 with SC Villa at the
Mighty Arena on Friday.

Bashir Mutanda and Joseph Ssemujju scored for new look SC Villa, who missed six of their players due to licensing issues.

Kirinya went ahead when Madondo opened the scoring inside 20 minutes
but Mutanda punished his former employers with an equaliser shortly after.

The momentum was now with the visitors going into the break in this StarTimes Uganda Premier League encounter.

And they duly went ahead inside the first minute after recess thanks to Ssemujju’s strike.

But with 15 minutes to go Madondo
equalised for Kirinya to deny Villa all three points.