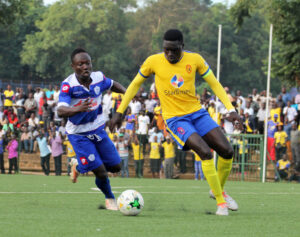 KCCA manager Mike Mutebi was left a satisfied man after his side shocked African giants Al Ahly 2-0 in a Caf Champions League match played at Namboole on Tuesday.

Two second half goals, a stunner from Sadam Juma and last minute penalty by skipper Timothy Awany were enough as KCCA sent shockwaves through Africa.

“I have always said we respect Al Ahly,” said Mutebi, “But today we displayed very good tactical discipline in the second half after some school boy mistakes in the first half.

“We should have scored more in the second half and in the end we have gauged ourselves against the very best. Today I’m very satisfied.”

Mutebi’s hitherto opposite, Hossam El Badry – who threw in the towel after the game – admitted he lost to a better side

“Today in the first half we controlled the game and created many chances, and we get penalty but didn’t score,” said El Badry.

“We didn’t utilize our chances and our second half performance was not like first half and KCCA attacked us.

“We conceded the penalty and after that it was difficult.”

The result leaves KCCA in third place but level on three points with Botswana’s Township Rollers, who beat the Ugandans 1-0 in their opening match.