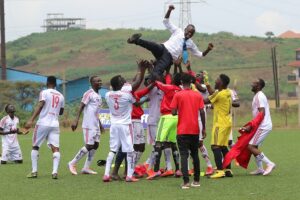 The flamboyant coach on Wednesday led his side to top-flight football following a hard-fought 1-0 playoff final’s victory over Kiboga Young at Njeru Technical Centre.

The victory saw Kitara join UPDF and Myda as the three teams promoted from the Fufa Big League to the topflight competition.

Brian Mululi Mayanja headed home the winner from a corner 10 minutes after halftime.

Kitara coach Twinamasiko believes the result was fully deserved for his Hoima-based side that has chased a maiden appearance in the top division for the last decade.

“This is history,” he said, “They brought me for this and I have delivered. Ten years down the road I think it was the right time for the team to qualify.”

Twinamasiko added: “It was a good game against a good team and a good coach. I think we gave our fans the best show.

His opposite, Kiboga coach Richard Makumbi rued his side’s lack of a cutting edge.

“If you don’t score, however much you have played well, distributed the ball a million times but as long as you haven’t scored you don’t win,” said the experienced coach.

“You saw the other team, once they scored they started kicking the ball out.

“Much as we pressed them, they packed their backline and we failed to penetrate.”

The Premier League is slated to kick off on November 20.